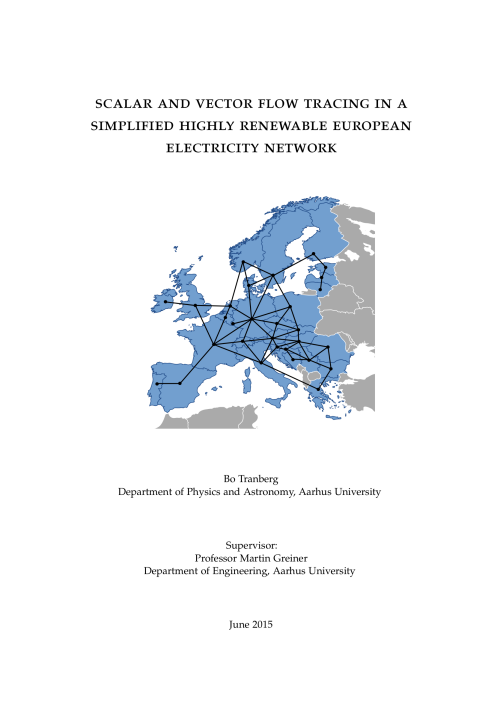 In this thesis we seek to trace the power flows in the network and thereby identify trading partners as well as the paths followed by these power flows. Tracing the flow of electricity and assigning it to a specific country is of utmost importance when allocating costs of maintenance and expansion of the network. We trace power flows first as a whole and later split them into components of electricity from solar, wind and conventional power plants. From this we are able to determine how much of the total network transmission capacity each country is accountable for. We then develop a fair measure of stake in the network that is based on the actual transmission of every country. This measure is used throughout the thesis to compare individual network usage under different circumstances.

Most of this thesis is focused on a future fully renewable electricity network, which is far from today's network layout. We therefore model the build-up of renewable electricity generation from the current level to a far-future system and investigate how the flow patterns in the network change over time. In the early years countries with a high starting level of renewable generation are accountable for most of the transmission in the system. Around 2030 most countries catch up and from then on the network usage is evenly distributed.

It is preferable to place the renewable generation capacity where it is the most efficient. We model a highly heterogeneous layout of renewable generation capacity and compare it with a homogeneous one. This has a tremendous impact on the flow patterns. This also shifts the stakes in the network where only a few countries become net exporters and most countries become net importers.